Recently I have been reading the Foundation series of books by Isaac Asimov and also watching the same story on Apple+.  Coincidentally the show on TV is only loosely based on the original story.  I have also been watching a Netflix series called "The billion dollar code".  This story is about a group of German hackers (Art+Com) that created a program called "TerraVision" in 1994.  It is essentially Google Earth but not on any computer.  The story is about how they sue Google over who invented Google Earth.

After rereading the Foundation series, I believe that neither Art+Com or Google invented the idea of Google Earth.  It seems that in the book "Second Foundation" (on Page 32 of my digital copy) is a description of a device called "The lens".

The Lens was perhaps the newest feature of the interstellar cruisers of the day. Actually, it was a complicated calculating machine which could throw on a screen a reproduction of the night sky as seen from any given point of the Galaxy.

Channis adjusted the co-ordinate points and the wall lights of the pilot room were extinguished. In the dim red light at the control board of the Lens, Channis’ face glowed ruddily. Pritcher sat in the pilot seat, long legs crossed, face lost in the gloom.

Slowly, as the induction period passed, the points of light brightened on the screen. And then they were thick and bright with the generously populated star-groupings of the Galaxy’s centre.

The description of the lens is almost word for word the same as how TerraVision is described in the Netflix series.  The main difference is the scope.  In the case of the "Second Foundation" the scope is an entire  Galaxy and TerraVision/Google Earth restrict themselves to the planet earth.

Either way the idea for what we now know as Google Earth can trace a genesis back to Isaac Asimov and potentially any patents may actually belong to him and his descendants?

Isaac Asimov was the person that ignited my love of hard science fiction. His books still to this day stand up to technical scrutiny.

Image #feetupfriday waiting for the show to begin :) 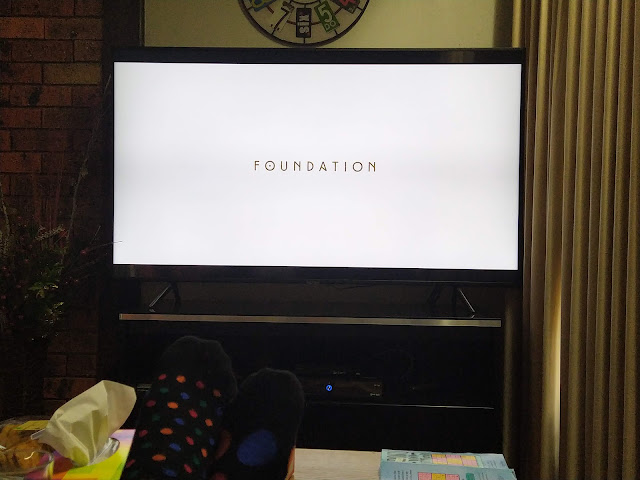 Email ThisBlogThis!Share to TwitterShare to FacebookShare to Pinterest
Labels: FeetUpFriday